Easter 2021 – This is the winner of the main egg. and the raffle raised £234.00 a great amount again this year from all the customers from T Baker (junr) Ltd. 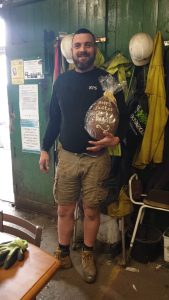 December 2020 – Liphook Bakery have raised another £107 for us. £46 from a raffle and £61 from their collection box. A great total and thank you again to Mark & staff for all your help.

December 2020 – Molly and the boys have again done a wonderful job getting all the customers of T.Baker (Junr) Ltd to buy raffle tickets and they raised £ 212.00. A BIG thank you to all who brought tickets. 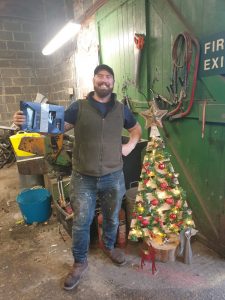 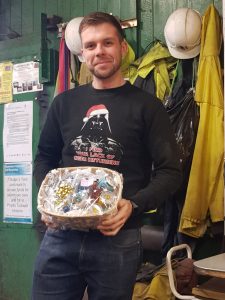 During the 2020 COVID pandemic we have been unable to have any fund raising events, but the following donations have been very gratefully received. £100 from Jackie’s cancelled  holiday spending money. £282 from the Champagne Club and £50 from Pavers Foundation (shoes).

April 2020 – The Champagne Club members have donated a further £237 to the charity. Thank you so much.

Burns Night – January 25th 2020 – £920 was raised on the night. A wonderful celebration of the life and works of Robert Burns. A big thank you to Julie from the Black Fox for a fabulous feast. A few images can be seen here – Burns Night Gallery.

Skittles Night – November 2019 – we raised £428 on the night. Thank you all who attended. See some images from the night here – Skittles Gallery. Overall winners were Janice and Spencer.

August 2019 – Another fabulous donation from the Champagne Club of £245 has been received. Once again we are very grateful for all their help.

We have now reached our target for Brain Tumour Research, having raised £50,115.54 to date and would like to thank all our friends and supporters who have helped us reach this goal.

Liphook Bakery raffled an easter egg and raised £123 for the charity. Thank you so much.

Easter 2019, the T.Baker yard raffled an easter egg and raised £287 for the charity. Thanks to all concerned. More pictures in the gallery.

April 2019, the easter skittles night raised a fantastic £1,073 for Brain Tumour Research. The overall winners of the skittles competition were Janet and George, seen below getting their trophies from Michael White, congratulations. More pictures in the gallery.

February 2019, the skittles night generated £412 for Brain Tumour Research. A further £100 was donated by Stewart from ‘Wheel Drive’, thank you so much.

We have now raised £47,989 for Brain Tumour Research and would like to thank all our friends and supporters who have helped us reach this figure.

We have had a donation of £430 from one member of the Champagne Club, also some other members donated another £220. Again they have been great by continuing to support us.

Christmas Raffle 2018 – £703 was raised and the winner of the Champneys Pamper Day was Roland Hawes, pictured here with Jackie’s 2 sons.

August 2018 – Skittles at the Black Fox Inn. A total of £320 was raised for Brain Tumour Research.

A fabulous evening with fish / sausage and chips supper, enjoyed by all who attended. The overall winner was Stephen (aka Smurf), runner up was Sarah. Dolly won the booby prize ! Pictured here with Mike and Jackie White.

June 2018 – Alan offered the use of his Tesla to drive four young car enthusiasts to their prom at Old Thorns in Liphook – raising £60.

June 2018 – once again the Champagne Club have excelled themselves and donated a further £565 to Brain Tumour Research. Thank you so much.

We have now raised £44,327 for Brain Tumour Research and would like to thank all our friends and supporters who have helped us reach this figure.

November 2017 – Steve from the Champagne Club has very kindly donated £250 being the fee he was paid for a TV appearance. Many thanks from us all.

The Champagne Club have donated from winning from the dogs that have just retired. Its a great total of £520 (June 2017).

The  Headley fun run runners raised an amazing £560 for the charity on the 2nd May 2016. Thank you so much.

Some members of the ‘Champagne Club’ have donated £275 of their winners from Bubbly Charlie after his retirement.

Our 4th of July Skittles night raised a total of £555.80 for Brain Tumour Research. Thank you Tim for attending and presenting the prize.

A team ran in aid of Charlies Angels in the Headley Fun Run on the 4th May 2015. They raised an amazing £1054 for Brain Tumour Research.

Mike has raised £71 from an Easter egg basket raffle at his works. Thanks to all the ‘boys’ for selling the tickets.

Mike and Jackie had a stall at the Greyhound Club and raised £298 from the sale of jugs, ornaments and pictures.

A big thankyou to the residents of the Pegasus Court retirement Apartments in Banstead who so kindly sent us a donation of £50 from friends & neighbours of Marie who sadly passed away after a short illness.

Burns Night 2015 – a very enjoyable evening at the Black Fox Inn raised £1,727 for Brain Tumour Research.  A great big thank you to all who attended.

We have had a donation of £250.00 from The Tilford & Frensham Trivial Pursuits Society. A small clay Pigeon Club whose members collect every year for worthy local charities and they kindly chose ours this year.

September Skittles night raised £255 for the charity, Jackie added a further £185 from sale of an old desk, curtains and some birthday money.

Seen here Jackie and ‘Little’ John on their stall and John presenting the ‘Best in Show’ cup.

We would like to thank Ian Carter for his kind donation of £200.

We have just received a cheque from Slimming World for £824.05 – fabulous, thank you.

Steph Hall and her daughter Leanne took part in the Headley Fun Run held on the 5th May – see images in the gallery. They raised £555 for Brain Tumour Research – a fantastic figure – thank you.

The skittles night held at the Black Fox Inn on the 26th April raised a grand total of £430 towards Brain Tumour Research. A great time was had by everyone who attended.

£1,054.60 was raised from wedding gifts at a family wedding. Congratulations and thanks to Trish and Lee.   £237 was from Sara who did a sponsored walk with a broken toe !

Having had a major knee operation 8 weeks ago, Mike decided to do a 10Km ride on an exercise bike at Champneys Forest Mere. So, on Saturday 5th April Mike completed the ride in 1 hour 1 minute and 37 seconds. View the full gallery of images here.

This raised a fabulous figure of £933.50 (and still rising) for Brain Tumour Research. Well done Mike.

Mike & Jackie have sold some vintage racing greyhound books and raised £180 for the fund.

We would like to thank Trevor Murphy and Nathan Snell for their donation of £150.

The dog show raised £101.00, the pamper day raised £363.50 and donations that have been arriving all the time this Christmas.We raised a great amount of £207.99 from people attending at Aldershot Football Club.

The Charity night held on the 26th October at Academy Snooker Club, Basingstoke raised over £5,000 for Brain Tumour Research.

We would like to thank Lee & Patricia for their donation, from the money saved by not sending Christmas cards.

A recent skittles night has raised £126 for Brain Tumour Research.

A big thank you to Paul, who has donated some of the prize money his Greyhound won in the Greyhound Puppy Derby.

Had a great sunny day at the Greyhound Club show and raised £177.50 from the stall. So a great big thank you for all who supported Charlie`s Angels.

The Fleet & District Dog Training Society has kindly donated £50 to the charity.

We have received a further donation of £200 from G & P Jobs Ltd.

The Disco at the Holly Bush on the 27th July raised £463.00 – many thanks to all who attended and a special thank you to the person who donated the buffet food.

A Cheese & Wine party in ‘Charlie’s Garden’ on the 20th of July raised a further £520.30 towards Brain Tumour Research, we’d like to thank all who attended.

At the Fresenius Kabi Oncology Plc fun day they held a raffle for the Charity and raised a wonderful £270. A big thank you to them and all their staff.

The grand opening of ‘Charlies Garden’ raised a fabulous £455.50. Many thanks to all who attended.

Windsor Championship Dog Show 28th June – we raised £80 selling goods and received a £20 donation. Thanks to all who made this possible.

A long afternoon at the fun dog show has raised a great £305 for Brain Tumour Research.

More money from the Champagne Club, the owners of Bubbly Charlie, a further £245. Our sincere thanks for all their kindness and help.

We have received $100 from a relation in Canada, thank you.

Slimming World (in Bordon) have made a kind donation from their members of £400. I can’t thank everyone enough for all their help. The total is going up and up.

NEWS – ‘Bubbly Charlie’ wins first race – Click here for paper cutting. We were given a further £360 from the Champagne Club and a member gave us £135 on saturday night. A big thank you to you all.

We are very grateful for a donation of £315 from the Lodge of Sincere Friendship 100 Club.

On the 6th May 2013 a gang of friends and supporters ran in the Headley 5 mile fun run. We are hoping that this will have raised well over £1000, so a great big thank you to all who took part.

Cygnets Nursery School, from Bordon, did a wear a hat day and raised a Total of £145.23p. This was the nursery that Charlie went to right up until he died. They were great as they would fit him in whenever he was well enough. One of the last times he went was for the Nativity play at the end of the Christmas term. He joined in and played his part and sang along with all the others. We can never thank them enough for all they have done.

We have raised a further £731 from cooking and other small events.

We hope you all had a great Easter. Some friends donated a large easter egg which when raffled raised £50. Another made 8 baskets of plants and raised a further £50 in donations. Thank you all.

Friday 22nd March 2013. Michael White (Charlie’s granddad) had his hair and beard shaved off at Tina’s Hairdressers in Headley (3, High St, GU35 8PP). This event raised over £3,800. See the press cutting from the Bordon Herald.

A further £20 was raised when Michael had his eye brows shaved off as well!

The Champagne Club Greyhound Racing Syndicate sold shares in a new pup they had named ‘Bubbly Charlie’. Each share donated £10 to the cause. All the shares were sold in a record time generating a total of £1000. We’d like to thank all the new owners of ‘Bubbly Charlie’ for their help.